We’re all fairly familiar with the word. This is a term we’ve read about, seen movies about, and written countless essays about. We’ve seen it over and over again in history. From the Holocaust to the Rwanda Genocide, the list goes on and on.

Most of us will spend our whole lives only witnessing a genocide from our living room as we watch the nightly news. We might not ever meet a person who has been ostracized, persecuted, or even tortured for their faith. If we’re lucky, we will continue to live a safe life in a country where we can voice our own opinions and beliefs, something that others in this world will never do.

I wish we could say that after one genocide or two, the world would become peaceful. People would miraculously stop killing and start treating each other as equals.

If only it were that simple.

If only it were that simple for the Rohingya people.

I’ve decided that it’s time to shed some light on the Rohingya people. Finally, their suffering has been brought to surface by the media. I am fortunate enough to interact with these people on a daily basis, but I’m assuming you don’t. The best way to learn about this is to hear it from someone working in the field. I am working in the middle of the conflict right now. I am teaching English at a Buddhist Burmese school where we have recently welcomed over 20 Muslim Rohingya children. To say that there is ethnic and religious tension here would be an understatement. My next couple of blog posts will be concerning the Rohingya issue and I hope it helps you gain a better understanding of what’s going on.

So let’s start with this:

The Top 10 things you need to know about the Rohingya – 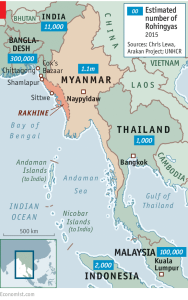 Taken from The Economist

Taken from The Economist

Brad Adams, Asia Director of Human Rights Watch says, “Each year, tens of thousands of Rohingya flee the dire human rights situation in Burma only to be further abused and exploited at the hands of traffickers in Thailand. The discovery of these mass graves should shock the Thai government into shutting down the trafficking networks that enrich officials but prey on extremely vulnerable people. Instead of sticking Rohingya in border camps or immigration lockups, the government should provide safety and protection” (theguardian.com)

For failure to combat trafficking, the US State Department recently downgraded Thailand to the worst possible rating on human trafficking: tier 3. This was displayed on the 2014 Trafficking in Persons Report.

Thailand is one of the worst countries to combat human trafficking.

Some Rohingya people are lucky enough to escape Burma, the country filled with religious persecution, sectarian violence, racist laws, internment camps, and lack of freedom. Those who leave the country that brought them so much suffering will enter another country and find themselves sold into slavery at the hands of the brokers. These are the brokers who promised them a safe refuge from Burma.

This crisis with the Rohingya people has received inadequate international attention. For all we know, this has been going on far longer than we think. Although we may be unsure of when it started, we should be entirely and unmistakably sure that it will end. Soon. Very soon. With the media picking up on the situation and the awareness spreading, there is no excuse not to step in for the sake of the Rohingya. We cannot let it continue. We cannot turn our backs on it.

As an English teacher, I feel powerless in this situation. I feel as though I am idly standing by while an entire race of people are being slaughtered. Recently, an exciting chain of events has unraveled, making me realize that I can make a much bigger impact on these victims of genocide than I ever imagined.

More on that later. For now, please share this post. Spread the awareness to your friends. Make sure everyone knows what is going on with the Rohingya people. Please check the news daily and keep up to date with the situation.

3 thoughts on “The Forgotten People”

Enjoyed the most by readers:

Check out more posts by SophieSkipsTown: