I’m back! I know how much you want to hear about the rest of my story. The anticipation was killing you, right?

Ok, so I arrive at the festival and am struggling to walk (because I’m wearing yet another lonchi that could possibly fall down). This time I am in heels as well, as if wearing a Burmese traditional skirt is hard enough. Let’s top it off with heels! Because we know how much Sophie just LOVES to wear heels!

When I arrived at the festival, people began to surround me, taking selfies with me and saying how beautiful I looked. I thought they were being sarcastic. I had never felt so ugly before in my life. But they seemed to enjoy it…maybe to the Thai and Burmese people, I was, what’s the word…eye candy? No, no. That’s probably not the word to describe my appearance. But they sure treated me like I was.

Anyway, my constant state of confusion continued…I had people yelling at me to come and sit down in one chair behind the stage, others were motioning me to go ON the stage. People were pulling me one direction, taking selfies with me in another, telling me to look one way, and yelling at me to look the other way. I guess the only way I can describe it is this: It was an extremely chaotic and eccentric mix between a prom and a wedding. Everyone is pointing a camera at you, everyone is posing for photos with you, and everyone is treating you differently because you look…well…different. It was too similar to prom, which scared me (except at prom, I was smart enough to know that dark black eyebrows on a ginger are highly unattractive). My cheeks hurt from smiling. I got yelled at for laughing my extremely unattractive “Sophie” laugh…which basically sounds like Roz’s laugh from Monster’s Inc. If any of you are unfamiliar with her laugh, you should go back and watch the movie. She’s the ugly, reprimanding, intimidating slug. Yeah, I’m waiting for someone to say, “Haha. That’s just like YOU!” So I’m glad I’m writing this in a blog where I can block any comments from people.

They told me if I laughed like that onstage, I would never win…because it’s so unattractive. How would you feel if someone told you that your laugh isn’t beautiful? It cut me deep, guys. It cut me deep.

Finally, the moment I had been anticipating for my whole life. My time to shine. My fifteen minutes of fame. The beginning of my modeling career. It all begins now. They announce my name three times (because we have three translators: one for Thai, one for Burmese, and one for English). As the very, very, VERY first contestant (remember, my “NOT Slytherin” moment backfired?), I walk to the center of the stage, greet the audience with a traditional bow, step onto the catwalk, and strut my stuff. (because that’s just how Sophie So Phine rolls, right?). I guess you could definitely say that I had my own “style” in this beauty pageant. That’s because I actually walked like a normal human being onstage. Unlike the other girls, who seemed to walk at the most painfully slow snail pace…smiling a fake smile, shifting their hips back and forth as slowly as possible. Then, they finally do their “pose” (my pose was some weird awkward “don’t let me trip” kind of pose), which was just so hilariously Asian. It’s really hard to describe this beauty pageant. You kind of had to be there.

Since I was the first to go, I was also the first to line up on stage, meaning I had to stay standing on stage with my fake smile and sassy model pose for the next 20 girls who walk, as my mom would say, “As slow as molasses.” One thing I didn’t mention about this beauty pageant is the Miss Popular award that was available to win. The Miss Popular award was given to the girl who received the most flower garland thingy ma jigs…I call them thingy ma jigs because I really don’t know how to describe them. They’re kind of like flower necklaces, but not really. Anyway, people can buy these flower garland thingy ma jigs for a contestant of their choice. They had the flower garland thingy ma jig (I’m getting tired of typing that out…we’re just going to call them flowers, even though they were nothing like flowers). 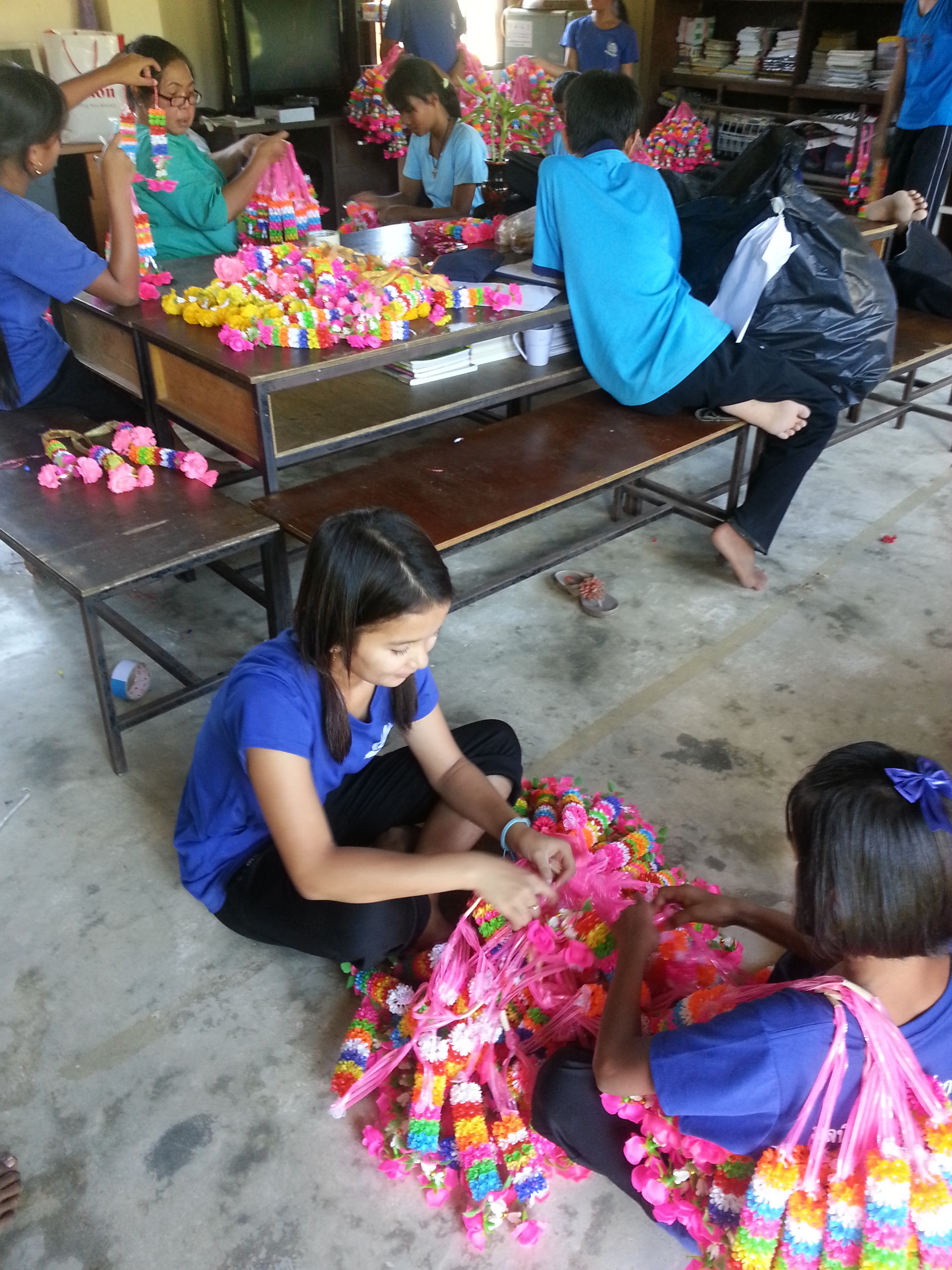 As I stood on the stage, trying to not to laugh my severely unattractive “Monsters Inc” laugh while watching the Burmese girls shine in their spotlight, I noticed that the other  girls who were standing next to me were receiving stacks and stacks of the flowers. I did get a few flowers, but not nearly as many as the girl next to me, who received, quite literally, over 250 bundles of flowers. It was absolutely hilarious. Every time someone shoved more flowers at her, I was on the verge of laughing…but I had to keep my laughter to myself because we know how unattractive I can be when I laugh.It was just so hilarious to see how serious people were about this beauty pageant. And it was even more hilarious when she is standing here, barely even able to carry all the flowers that she has in her hands while I’m standing here with one or two flowers. It was so embarrassing that my friend actually told me he felt bad for me and gave a girl money to buy me flowers. Of course, the girl didn’t understand what he said, so instead of buying me flowers, she ran to the nearest 7/11 and bought him soymilk…not sure how that miscommunication happened. But he got some soymilk out of it! And I was left flowerless. I told him he should’ve just given me the soymilk. It would’ve been a better gift.

The girl with the hundreds of flowers did end up winning the Most Popular prize…in case you were wondering.

We had to walk across the stage 3 separate times over the course of 6 hours. I didn’t eat for 12 hours that day. I wanted to faint on stage. The second time I went on stage, I introduced myself in Burmese. It was a pretty great moment. All I did was say who I was, my age, where I am from, and what my job is. However, every time I paused even for the slightest second, the crowd would erupt in applause. They were so excited to hear me speak Burmese. I felt like I was the president giving a speech, pausing every five seconds to wait for the applause to end. Needless to say, it was my moment of fame. 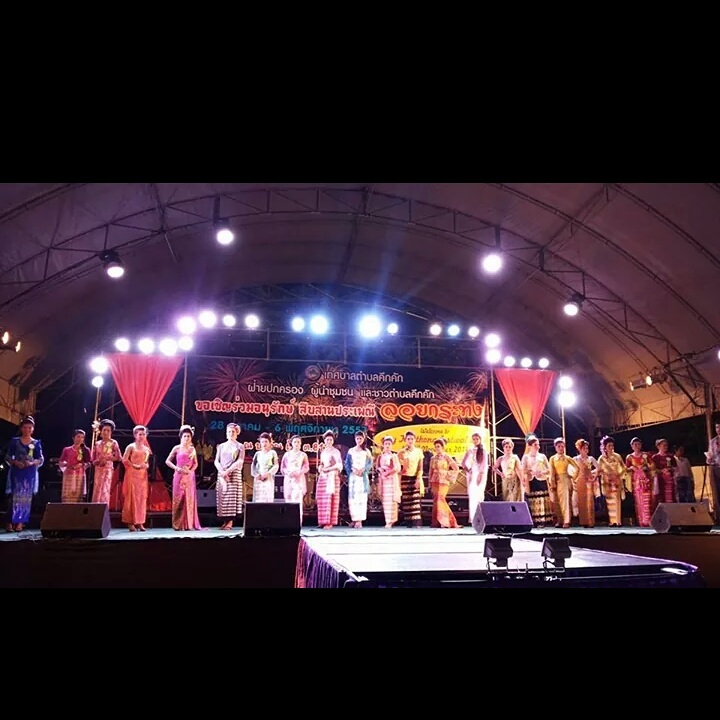 But then my fame ended when they asked me the question. You know the beauty pageant drill, right? They ask a girl about their opinion on some current event and their answer ALWAYS is, “world peace.” Well, I was pretty excited to establish my “world peace” statement, so I was ready to answer whatever question they had for me. The problem is, my question didn’t give me the opportunity to share any opinion whatsoever. This was my question:

“What countries are members of ASEAN and can you name all of them?”

Luckily I was familiar with ASEAN, so I said they had 9 members. Dangit. The answer was 10. I was able to play all dumb blonde and quickly change my answer to 10. Then I started to list them. I listed 8 of them and completely blanked out on the other two. Again, I played my dumb blonde moment, saying, “Oh silly me! I forgot to keep track of how many I already listed!” The problem with playing a dumb blonde in front of an audience of primarily Burmese and Thai speakers is that nobody actually understands your sense of humor. So it made no sense to anyone except for the one American guy who was there.

As I go off stage, humiliated, I am eager to listen to what the next girl’s question is, hoping she’ll get an extremely difficult question and maybe leave the stage crying (I was getting a little competitive. I mean, who doesn’t want to win a beauty pageant?). This was her question:

“Do you think that education for children in Thailand is important?”

That’s ALL!? Ah, I was cringing backstage.

Anyway, the night continued. Hour after hour, performance after performance, until finally, it was our time to do one last catwalk. As I went up for my final time, I realized this will probably be the last beauty pageant I will ever participate in. So naturally, I waved my hips and blew kisses at the audience on my last catwalk. The crowd went crazy.  I won’t go into the ceremony part at all, because that was just long and painful and I spent most of the time trying not to laugh. Long story short, I didn’t win a prize.

After the beauty pageant, everyone headed home. I was to the point of fainting from starvation, so luckily my friend took me out for dinner. It was quite a sight for people to see a white 18-year-old girl riding side saddle on the back of a motorbike, carrying a backpack, purse, and ukulele. Let’s not forget the traditional skirt she was wearing with high heels and how her hair was beautifully placed on top of her head as hard as a rock. And of course, let’s not forget how her eyebrows made her look as if she was angrily glaring at everyone she saw. Let’s just say that there were several heads turning as she set out on the main road in search for food.

I guess the moral of this story is this: if you want to follow your dream of having your “fifteen minutes of fame” and your “time in the spotlight” and your “moment when the audience erupts in applause every time they see you,” I will give you this piece of advice: it’s not impossible to live that dream! You might just have to travel across the world and wear painted eyebrows and speak a foreign language…but it definitely is possible! So take that advice and run with it (across the world).

I am going to end on this note to make everyone feel content about where they are living right now. I just cut open a mango, chopped it up, and ate it. The problem with eating mangoes is that they’re very messy. So I just went to the sink to wash my hands (because I actually have a sink in my new apartment) and guess what? No water. Yay. I also just ran out of drinking water and it’s 10pm, so I can’t go out and get more. So basically I’m writing this with no water to take a shower, no water to go to the toilet, no water to wash my mango dishes, or wash my mango hands (I used baby wipes to wipe my hands so I can type). Now it’s time to problem solve. Brushing teeth with no water? Hm.

Well I better go and figure out what to do. Yay ma she bu. (“No water”…again) 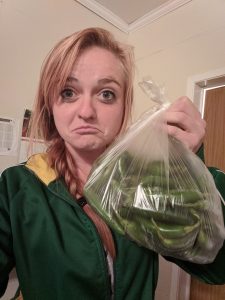 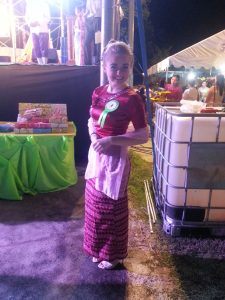 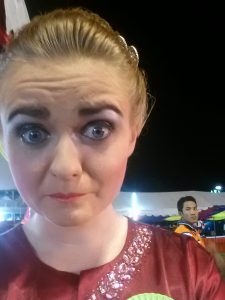 Beauty Pageant: Continued I’m back! I know how much you... 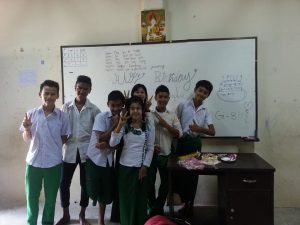 “Stop, teacher! STOOOOOOP!” is what I hear from a classroom...